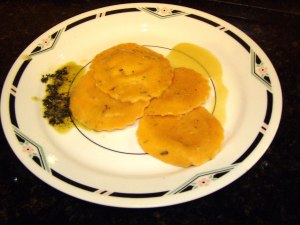 Sage Butter Sauce on the left, Maple Cream on the right

We bought some Butternut Ravioli thinking a change might be in order. Now, what do you use for a sauce on butternut ravioli? It needs to offset the earthy taste of the squash, usually that means something buttery, or a spice like cinnamon. I found two possibilities, one is a slightly scalded sage butter the other is a maple cream sauce.

Imagine my surprise when they both worked! The sage butter is made in a skillet. Fine chop some fresh sage, add a couple of tablespoons of butter and mix until the sage is crisp but not browned. Don’t use too high a heat or the butter will burn. Add some salt and pepper to taste and in about 7-10 minutes its ready.

I think this would work great as an appetizer with both sauces there for dipping.

1 thought on “Even I cannot believe it was that good”