Most synagogues host an Oneg after Shabbat services on Friday night. The name Oneg Shabbat means joy of the Sabbath in Hebrew and usually refers to a celebratory gathering held after Sabbath services, often with food and socializing.

Our synagogue, Temple Or Rishon, invites each family to host an Oneg once a year and many do so, often joining efforts with other friends or families. We have baked desserts for the Oneg we host with friends every year. This year I made eclairs and chocolate chip/raspberry bit/ganache covered brownies. These have been favorites of the synagogue membership. The recipes for both can be found at eclairs and brownies.

I made two dozen eclairs.

And three dozen brownies. This year I topped them with ground cashews. Last year one friend said they would have been the best brownies he ever had, if they had some nuts on them. 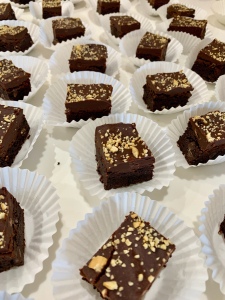