Well, it finally happened. The figs in our backyard tree are ripe and ready for harvest. To date, we have harvested about 55 pounds (about 25 Kilos) of figs. Let me be clear. That is the first harvest. We probably have 2 or 3 more to go.  Prolific tree, I just wish the apricot and plum trees would take a lesson. I made several pints of fig preserve and several fig newton filling (alone with some homemade fig newtons), fig and brie tarts and froze a few pounds for future consideration.

Picking the figs proved somewhat challenging. It turns out many people are allergic to the sap and/or leaves of the fig tree. As luck would have it, all of us were, some more than others. Soap (Dawn dishwashing detergent) and water and time worked well to remove the itch and rash. It was gone the next day. Next time, long sleeves and gloves.

After the figs were washed, dried and sorted the best were sliced (about ½” thick) and frozen. Some were laid out on parchment lined baking sheets and put in the freezer. Others were sliced and put into zip lock bags and a simple syrup with Fruit Fresh added were frozen. We shall see which method we like better. 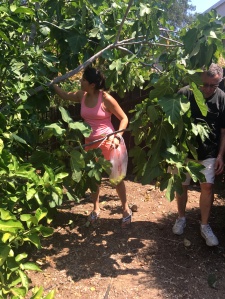 Frances and I picked the first half of the harvest. Daniel, The Young and Tall, joined us after his work the next day to  help with the high fruit. Rosie, the Supervisor as ever vigilant.

The fruit was washed, dried (wet fruit spoils faster) and spread as a single layer on paper towels in the refrigerator for processing the next day (after rash). Note to self: Use gloves on day two also.

The cut figs were boiled to 220oF and either mashed with a potato masher (Frances’ method) or food processed with a couple quick pulses (my method) and canned. I added a couple more pulses for the newton filling, which seemed about right in the final product.

Here are a couple of tips about making the fig newtons. The recipe makes just the right amount of cookie batter vs. filling, try it. After cutting the rolled dough to an 8”x14” sheet, roll it as rectangular and with as straight edges as possible. It will make the cookies look better.  Also, before trying to fold the dough over and pinching shut cut the sheet in half, or ever thirds, crosswise. This makes the soft dough easier to fold smoothly. More also, be bold when folding. Like flipping eggs in a frying pan. Just go for it. If you don’t fold far enough for the un-filled edges to meet, it’s a bear to try to stretch the top layer to meet the bottom to seal. 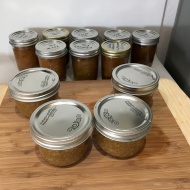 For the tartlets, be sure to use enough Brie (or other cheese) to fill half the shell. Too little and the cheese does not add enough flavor. You can always add a piece of cheese to the top to compensate. I also sprinkled the tartlets with a little flaked sea salt to offset the fig sweetness.

If you are using: