Overall the garden is progressing well. Most of the pants are healthy and

presumably happy. I wish the pepper would go into a growth spurt like the tomatoes did. (Damn kids, just can’t rely on them.) I staked the tomatoes with tripods made from bamboo. It was much cheaper than buying something prefab like I did with the cucumbers and pole beans. Old cut up sheets made good ties.

I am still having some problems with some critter liking my cucumber leaves. I tried spraying soapy water on the leaves and when that didn’t work i coated them with Nem. I gave that 3 weeks, I sprinked crushed egg shells around their bases, and yesterday brought in the big, non organic guns, Ortho critter spray. I have to do something to save these plants. But I am pleased that the cucumbers are such tenacious climbers. I may need to support some of the larger fruit but at present the vines themselves are doing just fine.

I have 4 cucumbers so far and one will be ready to harvest next week. The herbs are doing great as is the lettuce. We may be using them for Thanksgiving.

Thanksgiving is right around the corner (mornings are in the low 70’s now, can’t

you feel Jack Frost in the air? ) and we wanted to do something different with the squash this year. What better way of remembering growing up in New England than to add some nice crunchy fresh harvest apples and maple syrup!

Making this was easy and takes just over an hour. Here is what I did. Wash the squash and cut it in half crosswise. then cut it into 3/4″ thick slices and cut those into the semi circles you can see in the picture. Place the squash in an aluminum foil lined cookie sheet (I used a jelly roll pan, it has higher edges.) Combine 2 oz of authentic Vermont Grade A Fancy maple syrup with a teaspoon of margarine. (Nuke it for 20 sec but be careful the syrup doesn’t boil over. Spread about 1/2 of the syrup mixture over the squash and place in a preheated 350 deg oven.

Wash a couple of apples and cut them into slices about 1/4 – 1/2″ thick. Remove any seeds and core. Place on top of the squash after it has baked for 45 min and add the remainder of the syrup mixture. Continue baking for the additional 15 min.

When you remove it from the oven add a sprinkle of brown sugar to each “squapple” slice and brown it with a torch. The shell of the squash is tender enough to eat, but can also be cut away if desired.

and Frances’ wedding cake. She wanted the recipe, the nicest form of flattery.The cake here is another one using the same recipe

After last nights dessert I decided that while the marshmallow topping made a good, authentic S’mores, it was too much work for the result, and was way to sticky and stringy to eat with guests. Instead last night I replaced it with a vanilla meringue. The torch browned it perfectly, it was easy to eat and delicious!

I had this idea to make s’mores in our new dessert dishes. The bottom layer is crushed graham crackers, the middle some kind of chocolate custard and the top would be melted marshmallow with the top burned with a torch.

I put 2 graham crackers in a zip-lock bag and crushed them with a rolling pin distributing the crushed cracker with 2 tsp in each 3 oz. dish. The chocolate cream is from a recipe I found for chocolate pastry filling:

In a small saucepan, warm the milk over low heat until it is just hot enough to steam. While the milk is warming, whisk together the egg yolks, sugar, flour, cocoa powder, and cornstarch until the mixture is completely smooth.

Once the milk is steaming, add the melted chocolate to it and whisk until it is fully incorporated into the milk. Add half of the chocolate milk, whisking constantly, to the egg mixture. Add the milk and eggs back into the hot milk, continue stirring, and heat it for 1-2 minutes, until the custard reaches 170F on a digital thermometer and is very thick. Remove from the heat, stir in the vanilla extract. When it has cooled slightly but has not gelled, pour about 2 oz into each of the dessert cups.

Once the filling has set, add the marshmallow topping, spread to make peaks and use a blowtorch to burn the tips.

Having Tuesday off was good. On the other hand it was very good. I wanted a new

dessert to have for the occasional dinner. I have some new small glass flared dessert dishes and in my world the glass or dish is always full. 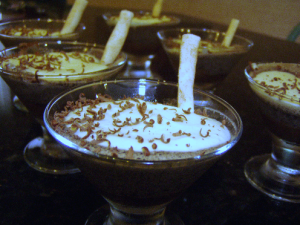 Combine the chocolate, butter, and espresso in the top of a double boiler over hot, but not simmering, water, stirring frequently until smooth. Remove from the heat and let cool until the chocolate is just slightly warmer than body temperature. To test, dab some chocolate on your bottom lip. It should feel warm. If it is too cool, the mixture will seize when the other ingredients are added. Meanwhile, whip the cream to soft peaks, then refrigerate. Once the melted chocolate has cooled slightly, whip the egg whites in a medium bowl until they are foamy and beginning to hold a shape. Sprinkle in the sugar and beat until soft peaks form. When the chocolate has reached the proper temperature, stir in the yolks. Gently stir in about one-third of the whipped cream. Fold in half the whites just until incorporated, then fold in the remaining whites, and finally the remaining whipped cream. Pipe the mousse into a serving bowl or individual dishes.

Put the bowls on a small cookie sheet ( I used a 9″x12″ jelly roll pan.) Tip the pans at a sharp angle. I used a beer bottle under one end (I wonder where that bottle came from?)  Refrigerate for at least 2 hours.

Combine water and gelatin in a small bowl and whisk until gelatin has completely dissolved. Whisk in cocoa powder and set aside to cool for 15 minutes. Place the egg whites in a medium bowl and, using an electric mixer, beat until soft peaks form. Add sugar gradually, working with 1-2 tbsp at a time, while you beat the egg whites. Once the egg white mixture has reached soft peaks, beat in the egg yolks one at a time at high speed. Slowly pour in the gelatin mixture and mix until uniform in color and well-combined.

Remove the dark chocolate filled dishes and tip them the opposite way on the counter. Evenly distribute the mousse into then and refrigerate keeping the same angle until set, at least 3 hours.

In a small bowl, stir together the gelatin and cold water. Set aside to soften. In a medium bowl, whisk together the egg yolks, sugar, and salt until smooth. In a medium saucepan, bring the milk to a boil. Pour the hot milk in a steady stream into the yolk mixture, whisking constantly. Return the mixture to the saucepan and cook and stir over medium heat until the mixture coats the back of a spoon. Remove from heat and pour the custard through a strainer.  Stir in the softened gelatin and vanilla and stir to melt the gelatin. Allow to cool. When the mixture has cooled almost to room temperature, whip the heavy cream to medium stiffness and fold it into the custard. Immediately transfer the Bavarian cream to the dessert cups laying level on the counter, as it will firm up quickly as the gelatin sets. Refrigerate at least one hour before serving.

Before serving, I grated some dark chocolate over the Bavarian cream. I also rolled some gum paste that I had in a combination of sugar and cinnamon to offset the sweetness of the mousse. Cut the gum paste into rectangles about 1″ x 2″ and roll into a tube with the sugar/cinnamon coating on the outside.